Longing for the last world

I am seriously obsessed with the New Horizons encounter with Pluto and Charon – the first thing I do every morning nowadays is checking if NASA uploaded new pictures. So far there is not much to see: a few frustrating pixels of black and white shades.  But they are worth looking, if only to remark the deep solitude of worlds, pale dots in a sea of void: 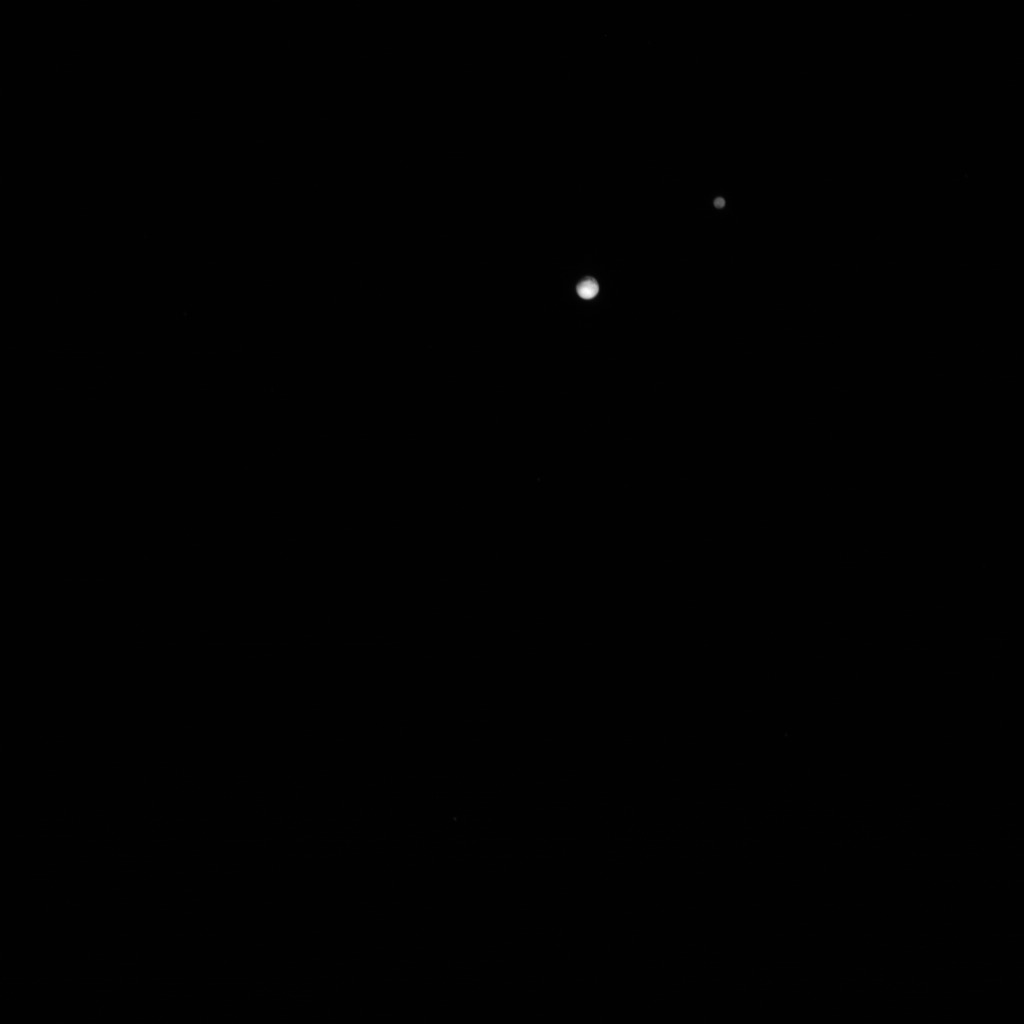 In a few days however we will have detailed pictures, our first real look on what has been so far little more than a speck of light. To see a new world unveiling its majesty in front of our eyes is a unique experience, one of the most symbolic of scientific discovery. However, decades of planetary explorations have made us jaded to it. After all we were just inebriated in the last years: Huygens revealing Titan, MESSENGER looking at the uncharted side of Mercury, Dawn meeting not one but two small worlds: Vesta and Ceres.

Well, such a banquet had to end. Pluto is, and it will be, the last. As someone remarked on the Unmanned Spaceflight forum:

We will almost certainly never again in our lives see a world this big up-close for the first time, and perhaps no people will for many generations to come.

The biggest world closer than Neptune which we haven’t seen up-close is Pallas, a quarter Pluto’s size.

For fans of first looks at a world, this is the Omega. We’ll probably get first looks at many small bodies: Comets, asteroids, and hopefully TNOs in the path of New Horizons, but to the extent that geological complexity requires some sort of minimum size, this is the last gasp.

The next time we get new science of such an interesting planetary body of this size, it will be something extrasolar, just a pixel across, giving up a few secrets to light curves, photometry, and spectroscopy.

Savor this. It’s the last time.

Actually there are other uncharted worlds of comparable size in the Solar System: Sedna, Eris, Haumea and Makemake come to mind. Their sheer remoteness however makes it very unlikely that we will send a probe to them in the foreseeable future. There are simply no plans about it – there are not even plans to come back to the (more reachable and scientifically richer) ice giants, Uranus and Neptune. The remaining icy dwarf planets will stay for decades what they are now: tiny dots of light in our most powerful telescopes.

I was sad realizing this -and somehow I hope you will be sad too. Yet one could wonder – why being so sad? Astronomy will give us plenty of discoveries, extrasolar planets are found every minute, and in the enigmas of dark matter and dark energy probably lies a new cosmological revolution. Planets are, after all, tiny specks of nothing in the cosmos. Looking things in a cosmological scale, a view of a new planet is basically as significant as a picture of a new grain of sand.

The answer is that planets are worlds. We sometimes use the two terms, “planet” and “world”, interchangeably, but they convey different meanings. A planet, a moon, an asteroid are scientific definition. A world implies an experience: it is a place, real and hard. It is the backdrop for things to happen. When you see a picture of Mars, or Titan, or tomorrow Pluto, you see something you could be standing on. You see rocks you could touch with your hand, mountains you could climb, plains you could ride. Your life could happen there – inhabitable or not, that is how it looks like. No matter how remote and alien they look, they are possible homes and they there, here and now: just far away.

We evolved on a world, we became what we are by exploring and inhabiting more and more of this world. It is perhaps a fortunate coincidence that, about at the same time when we finished to explore and chart Earth (well, there is work to do in the oceans), we became capable of exploring other worlds. And our Solar System planets are the most tantalizing: everyone of us can see them in the sky, and yet no one will ever touch them in our lifetimes. The only exception has been the Moon: the people who walked on it however are dying, and there are no robust plans to make someone walk there again.

But perhaps, one day, someone will again. That is it, the real reason for planetary exploration: the sheer sense of wonder, the expectation that one day we will see and touch and walk and feel these places with our eyes and hands and feet and bodies. It has little to do with scientific or practical considerations (even if it can be argued that manned exploration is much more rewarding, scientifically, than unmanned one) and more to do with our loneliness, with our boldness, with our meaning as a species, with our necessity of expanding the human experience. And this makes the case for human exploration more, not less important. It is not about scientists. It is about us.

Maybe it’s a little early—maybe the time is not quite yet—but those other worlds, promising untold opportunities, beckon.
Silently, they orbit the sun, waiting. (Carl Sagan)