Myth and authorship: or, who should own fictional universes?

In a recent post, a friend of mine poses a long-standing question I’m quite obsessed with. Who owns the fictional universes that an author creates?

The problem arises from a practical discussion. An author, Alan Moore, wrote a work of art, Watchmen. This work traces a parallel universe, a possible world, characters, a sequence of stories and psychologies. As it seems, the contract signed by Moore gives to a third party -DC Comics- the rights not only on the work Watchmen (interpreted strictly as the sequence of text and images it is made of) but also on the Watchmen universe. Therefore now DC is making a prequel of it, that is, a work that is not Watchmen but contains the same characters, builds upon the same universe and extends it.

Is it right or wrong? The mainstream opinion about comic book authors, with various tones, is that it is legal but morally wrong: DC can do it, but it shouldn’t, because the Watchmen author doesn’t want anything like that, and this is somehow immoral.

My friend, writer Susanna Raule, sums it up in a comment her point of view:

I believe that in giving away intellectual property one should behave just like for extreme sex: you can do anything, provided everybody is consenting.

Now, in the specific Alan Moore-Watchmen controversy, there are also a lot of other aspects: the greediness of DC and the asymmetry between giant publishing houses and authors in contractual power, the monopoly of DC etc. But let’s forget all of that, because these are somehow tangential questions (they will come back). Let’s put forward a basic question. If I invent a fictional universe, and someone else wants to use it, should I be asked? 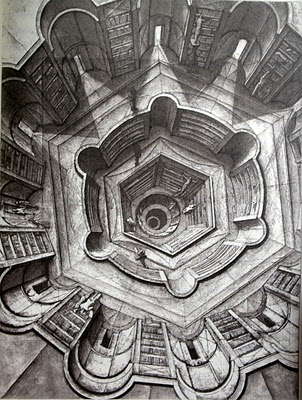 I have been poisoned, in my early teens, by Borges’ Library of Babel and by the infinite monkey theorem, therefore I know authors are just, in the end, machines that output artworks. Authors shine in being, by and far, the most efficient artwork-producing machinery, but this proposition, true today, could be false tomorrow. Other systems are in fact conceivable: every young programmer worth its name has written at least a poetry automatic generator (with not necessarily awful results).

This truth could appear bizarrely degrading to authors, but it isn’t: being able of doing something as subtle and mindbogglingly complex like creating a work of art, and doing it better than anything else is worth of pride for the human brain (A merit is probably due to the fact that the enjoyers of works of art are, often, other human brains). But to know that -that is, to know that artworks are mere combination of bits- allows us to look with a different perspective the whole concept of authorship.

Often it is considered fact (and more often than not by the authors) that a work, once generated, remains in some philosophical sense a property of the author. This then crystallizes practically as the legal intellectual property system -but even in a world devoid of any intellectual property protection, we would feel almost instinctively that, if Susanna writes comics or books, characters of such books are somehow hers, that she is the only one entitled to pull strings to her puppets.

But in truth Susanna Raule, even if she generated the work, is not the work itself. Someone else, in fact, could have well written or conceived it (Borges remarked that, given an eternity of time, it is unavoidable to write the Odyssey, for example). It happens that she did that, but this wasn’t necessary, nor this necessarily means that she is the only one entitled to decide of her work.

To be honest, it is often permitted (both by laws on intellectual property and by authors’ good will) a right on satire or knowledgeable hommage, like the works of the so called fan fiction. This however doesn’t affect what said above: authors believe to be puppet masters that control their puppets, and even if they can sometimes borrow them for others to play, it’s still them that decide who, when and how.

Problem is, the puppets are considered hers only inasmuch she has generated them. But now, what do we mean with “hers”? Just that she generated them. Does this entitles her with other moral rights, automatically? Our human sons and daugthers may bear our surname or our eye’s colour or hair’s curl, but they are not really ours: they are indeed independent creatures that can do -and indeed do- what they like. Differently from offspring, creative works are somehow immediately autonomous: once they are published they go round the world practically independently from the authors’ will. They talk to people the authors would have never wanted to meet. They say things the author never thought to mean. They give rise to totally unexpected reactions. They are something else, independent from the author -authors happened to generate them, but that’s it. Indeed, the merit of the author is that to have unleashed this independent (from his will) interaction between the artwork and the public.

This point of view can look like an idiosyncracy of mine, but in fact I just described the most ancient of human creative activities: myth. Long before we invented copyright and intellectual property, humankind narrated itself through characters, stories, sceneries and universes that were shared by whole populations across the generations. Homer didn’t ask anything to sing the ire of Achylles, Virgil didn’t ask permission to Homer to write the Aeneid ; Marlowe, Goethe and Mann didn’t ask anything to the unknown author of Doctor Faust.

A mythology isn’t but a fictional universe shared by many -and between these many are the marvellous fiction machines (and therefore myth machines) that authors are. Every sharing of a myth, is an alteration of the myth: my Faust is not your Faust. A myth is therefore a malleable material, that authors can and do use as a building material: a familiar framework on top of which one can build an enhanced communication. Communication which is often (in this postmodern era) about the myth itself, and generates works whose beauty and interest and depth would be unconceivable without the ability to use shared myths (unless we resort to much less efficient libraries of Babel).

For these reasons -that is, the richness that myth conveys, its tradition and the skeptcism on a metaphysical  connection between authors and their works, I am against evey intellectual property restriction on fictional worlds. Every time we restrict the ability to use freely fictional universes and characters, we restrict in an unnecessary way the number and type of artworks we are going to enjoy. With such restrictions, we can’t see how other authors do see such worlds -worlds that we know as much as our real one, often. Let’s think about the simple myths of our era: let’s imagine indie filmmakers writing movies in the Star Wars universe; let’s imagine what if we had indie comics about The Godfather, let’s think about rewriting the Lord of the Rings from Mordor’s point of view (this already happened, but it is hard to find due exactly to intellectual property protection of authorship). Or a world where authors revisit and renew, with exceptional talent, Superman, The Swamp Thing, Batman or even mix together dozens of literary universes together. Yep, because bitter irony wants that Alan Moore, now entrenched into refusal of seeing his own myths living against his will, built his career like nobody else by reusing imaginary worlds. The League of Extraordinary Gentlemen by Moore is exactly an exercise in conscious reelaboration and reuse of literary myth, where finally (and a bit oneirically) captain Nemo, doctor Moreau, Mr.Hyde and Martian tripods live together in a consistent story. Would we like a world where Wells or Verne could have stopped this from happening?

Someone will object that, all good intentions aside, authors still need to be paid for their work. But this isn’t going to change with freeing up fictional universes -it is quite independent from protection of works themselves. Only, if you want to live by doing Donald Duck, you have to prove yours are the best Donald Duck stories. There still would be competition, only now there would be more possibilities: one could compete by being the best at retelling and reinventing Star Wars or Neon Genesis Evangelion. After all, the world is also full of good ideas that have been met by mediocre realization -and the impossibility to reuse them is, truly, a crime.

What I mean is just to allow everyone to use what is, already, owned by everyone in their own imagination -and let everyone build upon everyone else in rebuilding and remixing fictional worlds. Let’s myths create themselves their own destiny, and let us authors not be afraid of letting their creative offspring free in the world. If you, who create a fictional universe, happen by chance to be also the best ones in narrating it, don’t be afraid to prove it.